DDial has written it's own rendition of the classic multiplayer game UNO. This multiplayer game is a Channel Game which means to play it, you need to enter the UNO game channel. While playing you can chat publicly with all players and privately with anyone on the system.

Type /t2 or /t3 to move to channel #2 or #3 where UNO is available. The game allows 2-10 players. You will be provided with instructions on how to proceed

Typing /join will enter you into the next game. When the next game is ready anyone can type /start who is already joined to begin the game.

As the game proceeds you will be given instructions on what to do. This is currently the only game that does not require /commands. All cards are presented in a graphical format and are "Clicklable" when making your selection.

If you are unfamiliar with the Rules of the multiplayer game, type /rules at anytime, or ask someone in the public chat channel.

At anytime you can type public and private messages while playing the game. People often socialize when playing Card Games within the channel. 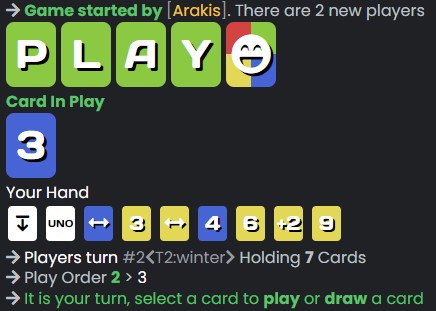